The pictures are how we look in the comics.

Coy is the founder of Alien Resort. He crash-landed on Earth and spent the first two hundred years alone. He narrates most of the posts and responds to comments. He marries Susan, who lived with her parents in the mountains of Alien Resort island for thousands of years.

Plucky is a spaceship captain who got stranded on Earth while trying to rescue Coy. She is the go-to expert on drones, radar, and all else technical. She’s also the resident psychologist. She and Deadpan enter into a romantic “understanding”. 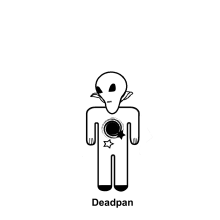 Deadpan has an imagination that is strictly linear–his entire music library consists of three electronic songs. He has superior technical expertise but all of his projects are secret. He lives in a cluttered shack. He becomes Plucky’s beau but his capacity for love is limited.

Lmao is the comedian of Alien Resort and makes no effort to contain his humor. He came to Earth with Plucky and remains her best friend. He climbs trees and uses nail polish.

Susan marries Coy. She arrived on Earth 60 thousand years ago and lived isolated with her parents in the mountains in the middle of Alien Resort island. Her father was protective, and her relationship with Coy is what modern Western society would consider traditional. Her brother Lucas came to Earth with the family, set sail, then returned briefly after 60,000 years. King Benjamin is the landlord of Alien Resort island and is very helpful. His wife is Queen Ramona.

Various episodes: Justin is a gamer who won a trip to the island. Dan Rosandich is a resort legend who gave Alien Resort a gig in his cartoon business. Ronald Wayne Devers was a Beacons of Night member who atoned after stealing Plucky’s cat. Wedding contributors were bluejayblog (flowers) and Jett and Toby (canine security). Queen Ramona (played by M.K. Waller) hosted a Zoom reception.